Material for ‘Metamodulation‘ has been gestating for more than 20 years. The original source material came from a May 1999 exhibition called “Biotope” at Kapelica Gallery in Ljubljana Slovenia. Biotope was a collaborative installation work created together with sound and radio artist Borut Savski. It consisted of a ‘web’ of long instrument wires stretched across the gallery that were activated into harmonic resonance by motor driven brushes. The audio signals from the wire resonances were sent into a custom matrix mixer built by Borut, the output of which was fed back into the system and the space. The system could be seen as a closed self-regulating system but also be ‘modulated’ by human actors or performers. External input included ourselves and a series of invited guests. We did our best, with the humble set of tools available, to create a subtle but dynamic ‘living’ system.

During the time between the end of the exhibition in 1999 and 2014, I made a series of mixes from audio documentation recorded during the Biotope. Audio sources included sounds recorded directly from the wires and mixes pulled from the matrix. Unsure what to do with this material, it sat on my hard drive for another six years. There are a good deal of memories, emotions and intellectual ruminations connected with these recordings. Apart from being an exciting and playful exhibition, the Biotope signified the end of my North American life and the beginning of my European one. From here there were old familial roots to discover and new artistic horizons to explore. There were also key concepts from the Biotope to expand upon, time, space and using sound as a metaphorical medium for complex biological and geological conceptions of the world we inhabit. Unbeknownst to me, the term ‘anthropocene’ would makes it’s public debut via Paul Crutzen and Eugene Stoermer’s concise article published a year later, in the May 2000 newsletter of the International Geosphere–Biosphere Programme (IGBP).

20 years might seem like a long time to allow a work to come into public existence but such a duration is a mere blip on the radar of geological time. In the spirit of comprehending timescales beyond the human, I want the story and listening experience of ‘Metamodulation’ to act as  a meditation on durational processes that challenge to our nanosecond driven conception of progress. In light of the fact that time is not on our side and we need to ‘act fast’ in terms of mitigating the effects of humanity’s potentially devastating impact on the global biosphere, long-term thinking may offer something of an antidote to our compounded dilemmas. Even abandoning the quantified division of time should not be out of the question as a means to re-imagine earthly processes beyond “time”, so to speak, as a key to alter our future.

In Metamodulation, the multiplicity of resonant wave forms cycle in and out of phase, not according to a predefined order but in accordance to the physical dimensions of the wires in the space and their induction into harmonic oscillations via motorised brushes. The construction and operation was guided by intuitive knowledge of adapting to the given conditions and minimising energy input in order to achieve some semi-stable stasis. There was however, never any equilibrium. Subtle fluctuations in temperature, voltages, wire tension etc continually introduced modulations and even periodically destabilise parts of the system entirely. What we hear in this piece are excerpts of these processes, mixed together from durational recordings and ‘metamodulated’ by the subsequent years since their inception. 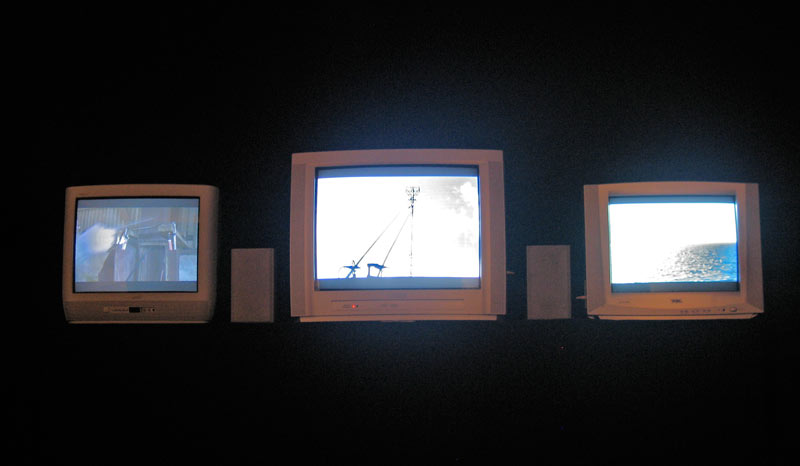